When you book with an account, you will be able to track your payment status, track the confirmation and you can also rate the tour after you finished the tour.
Sign Up
42665
DetailsItineraryMapPhotosReviewsFAQs

Are you looking for a unique and non-standardised tour of the popular and iconic political powerhouse of London? Well, this is for you.

In this Royal Tour Westminster Free Walking tour, we will take you to the Big Ben, Houses of Parliament, Westminster Bridge, Westminster Abbey, The Supreme Court, Downing Street, Banqueting House, The Horse Guards and The National Gallery and much more.

In only two hours not only you will have the chance to learn more about these historical buildings but also get to know the interesting facts and intriguing anecdotes about the Royal Family and England’s most popular and controversial political figures like Winston Churchill and Guy Fawkes.

Once the guided tour is finished you can continue from Trafalgar Square heading to the National Portrait Gallery, taking a short walk to Covent Garden, Leicester Square and Piccadilly Circus.

Be ready to take selfies and pictures and enjoy the most typical of London in a new, different and more exciting perspective!

We meet at Parliament Square and we take a short walk outside where the country’s heart beats – the Parliament Square. At the first stop you will find out a dark secret behind Big Ben, who wanted to destroy the Parliament and what was happening in Westminster Abbey and why nobody could see it on TV?

Over the next few stops we will revel to you how rude or funny Churchrill was just outside his War Rooms, how many times a year the Queen celebrates her birthday and who is commemorated with the smallest monument on the Horse Guards Parade.

We will take a stroll through the beautiful St. James’s Park to hear about royal scandals, love affairs and secrets. Standing outside Buckingham Palace we will get to know Queen Victoria, find out if the Queen is at home and why does she need her own flag.

At the next stop – St. James’s Palace we will go back in time to troubled and fascinating Tudor times. How it really was with Henry VIII and his six wives, how he and his children changed England and why the Queen had bad teeth?

By the Duke of York Column we talk about nursery rhymes, the first nurse Florence Nightingale and who taught doctors to wash their hands.

Finally, as we get to Trafalgar Square you find out how to pickle a soldier, what is the worst thing about being the Queen and where you can ride on the right-side in London. 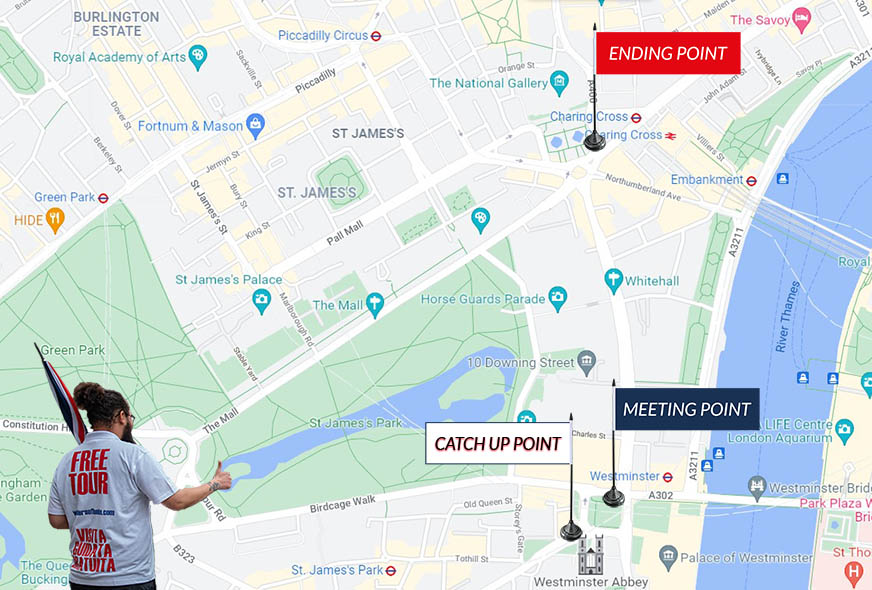 Very enjoyable, would definately do it again, and probably would try some of the other tours around London. Had our tour round with Matt and he spoke like he had a real passion about Londons history and too share it with people.

I joined the tour of Westminster yesterday and was absolutely amazed by the amount things I didn’t know! Our tour guide, Matt, was full of interesting stories and facts and made us all laugh. The tour lasts for around 2 hours 15 minutes and the pace is not too fast so would suit both young and old. The tours are free and you can pay a donation at the end of the tour. Thoroughly recommended.

Royal Tour Westminster usually starts at 11 am and it runs every week, please check the calendar to find available dates.

Where does Royal Tour Westminster start?

Where does the tour end?

How long is the tour expected to last?

The Free Royal Tour Westminster lasts for around 2 – 2.5 hours.

How will I find the tour guide?

Look for the guide with our unique blue, red and white umbrella with our logo.
You will receive more detailed instructions by email after your booking.

What happens if it is raining?

We go out RAIN or SHINE, so if it’s drizzling please remember to bring a rain jacket or an umbrella.
Only in case of unbearably inclement weather, the tour will be rescheduled and you will be contacted as soon as we can.

Can I just show up without booking?

Yes you can, but we highly recommend to make a booking which is absolutely free and it takes less than one minute.
This is because in case of a very large group, for health and safety reasons we would need to accept participants with booking only and unfortunately if you have no booking we will have to send you home.
Please note that we can’t take groups of 6 people or more on our free tours, if this is the case please get in touch with us here to enquire about a private tour private@wondersoflondon.com.

What does 'Free Pay What You Can' mean?

Wonders of London works on a pay what you feel basis, we understand that many of you have travelled various distances to get here, some of you might be locals, some of you might be on holiday here and we know that it can be difficult to enjoy all of London’s best attractions without spending a fair penny. We want our tours to be accessible to anyone and everyone so we don’t charge a ticket price but just bear in mind that are guides are working guides so we ask that at the end of the tour just have a think about what the tour was worth to you and pay however much or small you feel.

FREE
10 travellers are considering this tour right now!
By clicking “ACCEPT” or continuing to browse this website, you consent to the use of all the cookies.
Cookie settingsACCEPT
Manage consent