When you book with an account, you will be able to track your payment status, track the confirmation and you can also rate the tour after you finished the tour.
Sign Up
47048
DetailsItineraryMapPhotosReviewsFAQs

Have you ever walked through London and wondered “Where are the statues of women?” or have you ever walked around London and counted the statues of women then tried to do the same with the statues of men? If you did, what differences did you notice? We at Wonders of London have walked through the streets of London with a thought always residing in the backs of our minds. This thought is “Surely women have contributed to history just as much as men, but where are their statues?” Join us on this amazing free walking tour through the London boroughs of Lambeth and Westminster (which is also known as The City of Westminster) and discover the statues, memorials and stories of some of the amazing history changing and history making women of London. On this tour we will discover the story of the woman who burnt the City of London down, the story of the queen who saved The Burghers of Calais, amazing nurses and heroic spies from World War II. When we say women we mean real women as opposed to mythological representations of women or statues that embody the ideals that are often associated with women and the statues include but are not limited to Mary Seacole, Florence Nightingale, Emmeline Pankhurst among others. And of course, we will make a particular note on the difference in the representation of women on this tour.

Starting at Lambeth palace this amazing 2 and a half hour tour will take you past Lambeth Palace towards Westminster Bridge and St Thomas Hospital. From St Thomas we will cross over Westminster bridge for amazing views of the London Eye and Big Ben. From Big Ben we will go to Parliament Square for great photo opportunities including The houses of Parliament, Westminster Abbey and the Supreme Court.

From there we go to the Victoria Tower Gardens for an amazing view of the Victoria Tower which tour guide Vincent thinks is better than Big Ben. After that we will walk down Whitehall/Parliament Street for views of Downing Street, The Royal Horseguards and Banqueting House before continuing on to Trafalgar Square. From Trafalgar Square we will go to the final stop on the tour which is directly opposite the beautiful St. James’s Park.

This tour is recommended to all ages although topics include war, disease, death, murder, suicide and the wrongful treatment of women in history. 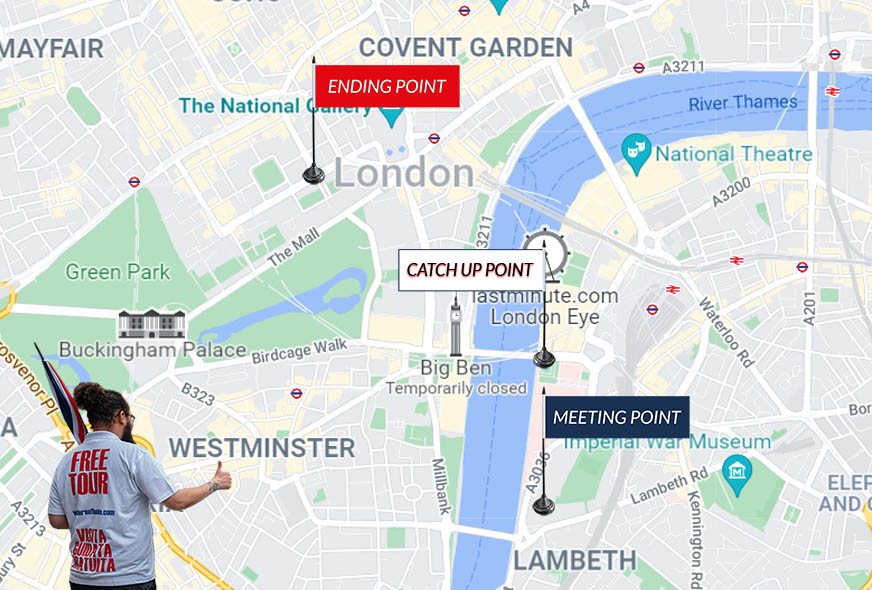 When does Amazing Women in London Tour run?

Where does Amazing Women in London Tour start?

Where does the tour end?

How long is the tour expected to last?

The Amazing Women in London Tour lasts for around 2.5 hours.

How will I find the tour guide?

Look for the guide with our unique blue, red and white umbrella with our logo.
You will receive more detailed instructions by email after your booking.

What happens if it is raining?

We go out RAIN or SHINE, so if it’s drizzling please remember to bring a rain jacket or an umbrella.
Only in case of unbearably inclement weather, the tour will be rescheduled and you will be contacted as soon as we can.

Can I just show up without booking?

Yes you can, but we highly recommend to make a booking which is absolutely free and it takes less than one minute.
This is because in case of a very large group, for health and safety reasons we would need to accept participants with booking only and unfortunately if you have no booking we will have to send you home.
Please note that we can’t take groups of 6 people or more on our free tours, if this is the case please get in touch with us here to enquire about a private tour private@wondersoflondon.com.

What does 'Free Pay What You Can' mean?

Wonders of London works on a pay what you feel basis, we understand that many of you have travelled various distances to get here, some of you might be locals, some of you might be on holiday here and we know that it can be difficult to enjoy all of London’s best attractions without spending a fair penny. We want our tours to be accessible to anyone and everyone so we don’t charge a ticket price but just bear in mind that are guides are working guides so we ask that at the end of the tour just have a think about what the tour was worth to you and pay however much or small you feel.

FREE
9 travellers are considering this tour right now!
By clicking “ACCEPT” or continuing to browse this website, you consent to the use of all the cookies.
Cookie settingsACCEPT
Manage consent